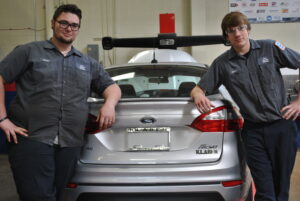 PLCC’s Automotive Technology program would like to extend a special thank you to local auto dealer and community partner, Tom Alcorn, of Klaben Ford.  Klaben Ford loaned the Auto Tech program a 2015 Ford Fiesta for two days so that seniors Aaron Taylor and Justin Hartley, both from Coventry, could prepare for the Ford/AAA Student Auto Skills contest in Independence earlier this Month.  The young men earned their spot in the hands-on contest by placing PLCC in the top 10 schools in the state with a written exam.

The hands-on contest was comprised of 10 teams of 2 working to diagnose and repair their Ford Fiesta, which was lined up in a row with the other 9 competitors.  All vehicles were bugged with the same problems.  Each competing team was given a repair order and had to race against the clock to repair as many of the issues as they could.

“Tom Alcorn, a PLCC graduate himself, has actively been working with our auto tech program for years, said Ron Balis, Automotive Tech instructor.  “He has served as a guest speaker, an advisory committee member, provided parts for training and has also employed many of our students at Klaben.  We cannot thank him enough for his continued support of our students and PLCC.”

We take pride in our facility and welcome the opportunity to show it off!  You would never buy a car without looking at it first.  Choosing the place to give you a head start on a successful path in life should be no different.  We invite you to schedule a tour of our beautiful campus.  We’re pretty sure you’ll be impressed!

If you are a high school student, please note that you will have several opportunities to visit PLCC during your sophomore year.

Once we receive your request, a PLCC staff member will follow up directly. Thank you for your interest, we look forward to seeing you soon.